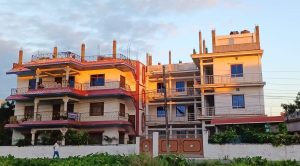 National Institute of Technology (N.I.T.), Biratnagar, was established in 2052 B.S (1995 A.D.) by the Affiliation of Council for Technical Education and Vocational Training (CTEVT).

The Institute is well known for its dedicated faculty, staff and the state-of-the art infrastructure conducive to a healthy academic environment. The Institute is constantly striving to achieve mid to higher levels of technical excellence.  Evolving a socially relevant and yet internationally acceptable curriculum, implementing innovative and effective teaching methodologies and focusing on the wholesome development of the students are our concerns.

N.I.T., is located in the center of Biratnagar Metropolitan City. Biratnagar is a Metropolitan city in Nepal, which serves as the capital of Province No. 1 and was the capital city of King Virata in Mahabharat era. With a population of 242,548 as per the 2011 census, it is the largest city in the province and also the headquarters of Morang district. As per the preliminary report of 2021 Nepal census, Biratnagar has an estimated city population of 244,750. It is one of the cities of the Greater Birat Development Area which incorporates the cities of Biratnagar-Itahari-Gothgau-Biratchowk-Dharan primarily located on the Koshi Highway in Eastern Nepal, with an estimated total urban agglomerated population of 804,300 people living in 159,332 households. Biratnagar is located 399 km (248 mi) east of the capital, Kathmandu, and 6 km north of the bordering town of Jogbani in the Indian state of Bihar. The highest peak in the world, Mount Everest, is situated 174 km (108 mi) north of the city.

Biratnagar was declared a metropolitan city on 22 May 2017, thus pushing the total population to over 240,000. It is the sixth most populous city of Nepal after Kathmandu, Pokhara, Bharatpur, Lalitpur and Birgunj, with 244,750 inhabitants living in 45,204 households as per 2021 Nepal census. It is the most densely populated city among all cities out of the Kathmandu Valley.

The city is home to the Biratnagar Jute Mills, the first large-scale industry of Nepal. Besides being considered as the industrial capital of Nepal, the city has contributed actively to the Nepalese democracy movement by being the birthplace of five prime ministers of democratic Nepal. The latter claim is also evident from the fact that the first labor strike leading to the anti-Rana movement started from Biratnagar.

Modern-day Biratnagar serves as an entry point to eastern Nepal as well as north-eastern India. It is the second Nepalese city, after Janakpur, to have a connection with the Indian Railways and the only city other than Birgunj to operate an integrated check post (ICP) on the Indian border.

People’s power plays a big role in the development of the country. Skill is the best tool for employment. Therefore, providing skill for employment to reduce poverty is a leading organization in this field. Qualified, experienced and trained instructors are providing services through the use of new technologies. Today, we are happy that our products are serving the society with mind, action and speech. With the aim of expanding the services of the organization, programs such as BBA, B. Pharma, D. Pharma, Civil Engineering, Computer Engineering are offered at graduate and diploma levels. At present, diploma and pre-diploma level programs are in operation, and as usual, cooperation and good wishes are expected here.